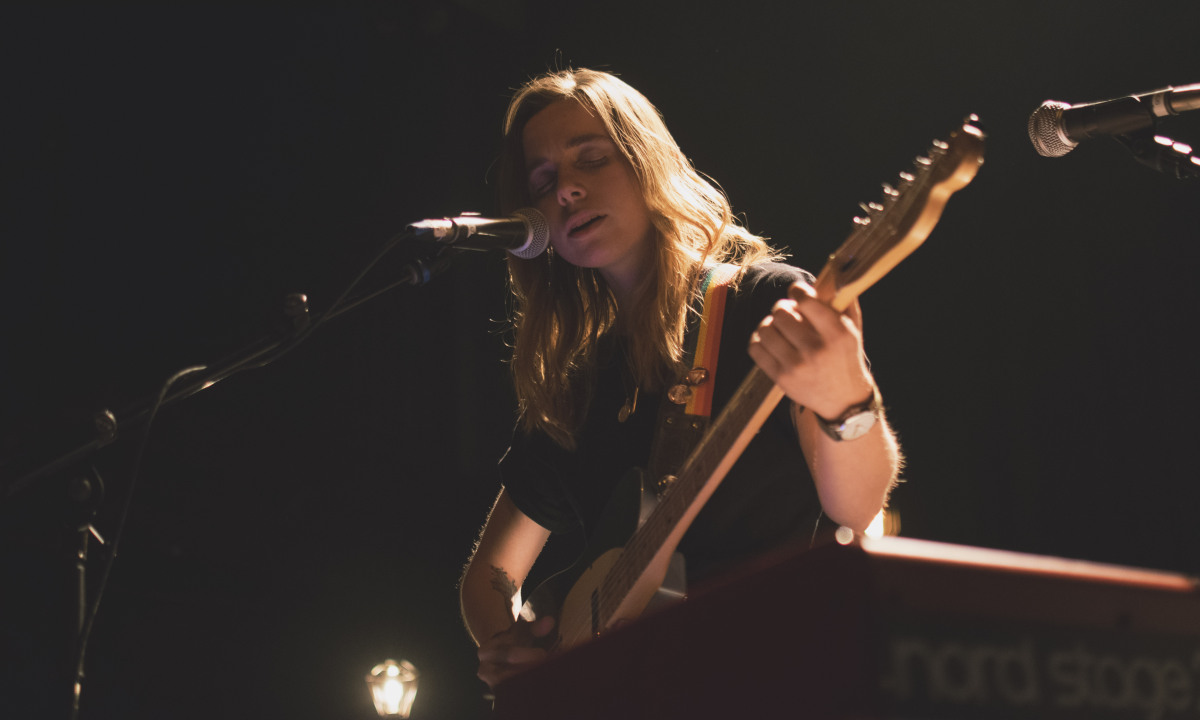 In lieu of Monday’s “Me Too” social media campaign advocating for solidarity against sexual harassment toward women, the all-female set at 9:30 Club Oct.17 was nothing less than empowering.

The stage, decorated with nothing but warm lanterns, brought a sense of comfort to the venue, as she filled the room with whirling chorus, downtrodden minor scales and piercingly delicate vocals. Baker’s very presence pulled a curtain of silence over the audience as she humbly attracted all the attention in the room.

Baker poured her soul into “Appointments,” a single off of her latest record, “Turn On The Lights,” set to release Oct. 27. Her somber tones, intricate riffs and introspective lyrics created a mist of addictive, melancholic emotion.

As she progressed through “Funeral Pyre” and “Something,” tears brimmed on the eyelids of her fans and the chatter continued to diminish, enough to hear the ice maker churn behind the bar. She continued through the set, weaving singles from her debut “Sprained Ankle” with new tracks “Shadow Boxing” and “Red Door” from “Turn On The Lights.” All songs were received with teary eyes, slightly dropped jaws and hypnotic, soft gazes.

Violin harmony accompanied Baker on “Vessels” and “Something,” adding another level of depth to her already strong set, and creating an even stronger sense of awe.

Baker exercised her musical talents on both guitar and piano, and her face gracefully contorted as she belted moving lines like “I think there’s a God and He hears either way when I rejoice and complain” in “Rejoice.”

Her humility and visible gratitude for her audience was both authentic and charming, as she repeatedly thanked them for listening, clapping and supporting her through her musical career. She shared quick anecdotes between songs that generated chuckles and laughs, and even laughed at herself for being “so weird.”

Her self confidence is truly admirable both on and off stage: she is as down to earth and in tune with herself as a proud, queer Christian from the southern United States could be. Her gradual rise in popularity in the music scene took nothing away from her character, a lesson more performers ought to emulate.

I stumbled across Baker’s music about a year ago. Finals season was in full swing, and I was listening to Touché Amoré’s latest album “Stage Four,” when I heard beautiful backup vocals on the track “Skyscraper.” It seemed odd and almost out of place that such a small, shrill voice was present in such a heavy rock song, yet I soon realized that there was no one more fit for the job.

I learned that those vocals were Baker’s, which ultimately led to listening to “Sprained Ankle” on repeat for months straight. I read countless interviews and watched numerous live studio performances. Yet nothing could have prepared me for her powerful set at the 9:30 Club, which easily holds a place in my heart as one of my favorite concerts.

What was even more heartwarming was how all three women spoke of their utmost joy for this fall tour, appreciating the privilege to perform with fellow admirable females, friends and talented musicians. We as attendees should consider ourselves lucky to have been present for such a spectacle in the indie rock scene.

Piece originally published by The Writer’s Bloc on October 20, 2017.