Mental Illness in Music: The Journey of Eliminating the Stigma 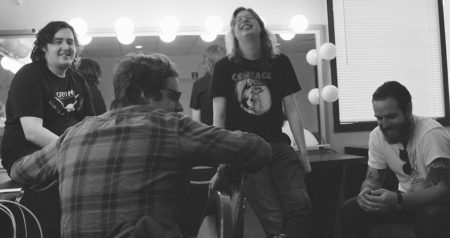 The rock music world has undergone another wave of tragedy since May, with Soundgarden’s Chris Cornell and Linkin Park’s Chester Bennington suicides pulling the topic of mental health back in to the spotlight as a topic of discussion.

Whether it be Cornell, Bennington, Cobain or O’Connor, the relationship between mental illness and musicians has been documented: according to a 2015 study conducted by the Icelandic genetics company deCODE, painters, musicians, writers and dancers are 25 percent more likely to carry genes that raise the risk of bipolar disorder and schizophrenia.

“The project we started as a source of joy and positive expression had become something that was slowly eating away at our mental health and our friendships,” wrote vocalist and guitarist Jake Ewald in a Facebook post Feb. 21.

Although unexpected, the band’s move to “take a break for a little while” as Ewald put it, abides by the band’s platform on reducing the stigma surrounding mental health and its treatment.

Maturing from singing songs about girls and Twitter, MoBo’s latest release Holy Ghost illustrated transparency in frontman Brendan Lukens struggle with depression for the first time, as well as depicting the bands’ shared struggles with identity and stress. Lukens has since frequented Twitter with encouraging messages and insight into the everyday life of someone dealing with mental illness while “sending love and strength to anyone who needs it.”

“We have been championing the importance of mental health for a while now, and we recently realized that it would be wrong for us to ignore our own health any longer,” Ewald wrote. The hiatus announcement was paired with handwritten suicide hotlines.

“I’ve told them many times, Punk Talks would not exist if it weren’t for Modern Baseball,” said Allen, who graduated this spring from the University of Louisville with a masters in social work.

“We work with bands during the writing process, before during and after tours, anytime that is particularly stressful for them,” Allen said. “I have found in my work that the number one way to engage bands in mental health treatment is to get to know them on a personal level.”

While other organizations have focused primarily on raising awareness, developing close relationships with musicians is considered “pretty novel” for the music scene, said James Cassar, managing news editor for Modern Vinyl, a music news site based in Erie, Pennsylvania.

“Sheridan’s drive to make the scene a better place, in the very generalist of terms, is good, and it doesn’t really exist in the way that she is doing it—providing free mental health services—in the age of Trump where healthcare is thrown under the bus or under question,” said Cassar.

Allen moved to Philadelphia this July “hoping that Punk Talks can take a more active role in the community with the bands that are in that area.”

Allen was preparing to go on tour with Orlando rock band You Blew It! when Modern Baseball announced their cancellation, meeting with Ewald and bassist Ian Farmer in March and wholeheartedly supporting the group’s decision.

“I really commend them for doing this because I’m sure it was not easy,” Allen said.

The experience You Blew It! frontman Tanner Jones recalled form working with Sheridan was nothing less than refreshing.

“Generally, the part that is most taxing is a two parter: the stress of getting places on time is very pressing, but also I think more importantly, the stress of being the center of attention for three hours a night and then being absolutely and totally alone for the other nine hours of the day,” he said. “It’s a game of highs and lows, and those valleys and peaks tend to become very stressful.”

Jones compared the stigma of mental health to that of promiscuity of the 1950s: it wasn’t that people weren’t having sex during the decade, but rather it simply wasn’t talked about. He believes the topic has received more attention because of the elimination of its taboo.

“Talking about or even showing that you had feelings or sensitivity to anything was kind of …  an insult.” he said. “Fortunately, people are starting to talk about it more and feeling more open. I think that’s why we’re seeing a lot more of it now.”

Bands’ relationships with their listeners is rooted in the empathetic lyrics, such as You Blew It!’s “Like Myself”—a song about not feeling like oneself—or Modern Baseball’s iconic “Fine, Great” with the bluntly poetic line “I hate worrying about my future, cus all my current problems are based around the past.”

This is higher than any other age group included in the study.

Modern Baseball’s effort to put their mental health first resonated with these fans, from Philadelphia and beyond.

Thousands of their near 200,000 Facebook likes and 90,000 Twitter and Instagram followers commented their experiences with mental illness, often crediting the band for inspiring them to overcome, and wishing them the same during their break.

“As someone who suffers with mental illness myself, I’m always inspired and motivated to keep going because of you guys,” wrote Ellie Walker who lives in the U.K. “It sucks to hear you’re all going through this but I’m glad we’re not alone. Take a good rest and I will see you all soon.”

Others praised the group for their honesty with themselves and their fans, wishing that musicians before them would have followed suit.

“It takes a lot of courage to be so open and honest with your fan base,” commented Andy Hakes of Buffalo, New York. “I can’t help but wonder how many other bands in history would still be healthy and going strong if they’d been as courageous and honest as you guys are.”

This piece is an adaptation of an article intended for The Philadelphia Inquirer. The original was posted by The Writer’s Bloc on March 17, 2017 and can be found here.