come back to earth

Unlike Mac Miller, I’m from the burbs, not the Burgh.

However, whenever anyone asks where home is, I’d much sooner say Pittsburgh than Beaver, Pennsylvania.

I have a lot of Pittsburgh pride— interestingly more now that I live 300 miles away than when only 30 miles of highway separated me from the City of Bridges.

I solely use Heinz condiments, defiantly defend “pop” over “soda,” reserve Yuengling (okay okay the brewery is based in Pottsville, sue me) as my favorite beer and Primanti’s my favorite sandwich.

I inherently know that all 446 of our bridges are colored not yellow but Aztec Gold, Andy Warhol documentaries make me emotional and my pediatrician’s office featured a detailed mural of Mr. Rogers’ Neighborhood.

So as a 20-something college student I figured it was about time to like Mac Miller, someone whose Pittsburgh pride puts even mine to shame— namely due to his Pirate’s P tattoo on the top of his hand, not to mention his numerous Burgh references in his musical discography.

The 412 dial tone in the middle of “Godspeed / Perfect Circle” in particular, I highly identify.

For that reason I’d say Mac inspired me to appreciate my roots, no matter how far away I may stray. That reason, I think, explains how a distant celebrity death hit me so close to home these past few days.

I’m embarrassed to admit that I hadn’t previously followed Mac Miller’s entire career. I didn’t listen to “Senior Skip Day” in high school or see him co-headline First Niagara Pavilion with Wiz Khalifa for the Under The Influence of Music 2012 tour.

But I need not feel guilty.

What’s important is that I would later come to love him, and now in his absence feel this numbness, an unquantifiable emptiness, an odd homesickness that will be difficult to refill, if at all.

He hoped not to join the twenty seven club, so I guess in an odd sense, I should believe he’s at peace having gotten his wish. But God, if only he would’ve been on the other end of that timeline.

What’s unique about this situation is that he didn’t leave us empty handed.

While to our knowledge there’s no handwritten note, Mac left us Swimming, which is not just a musical masterpiece, but a gift.

It’s a bluntly honest narrative of his being hostage to his own world, a portal into the very thoughts that became his enemy. Every lyric, rhythm and melody paints a beautifully melancholy portrait of his discontent and dissatisfaction with life, fame and success:

“I don’t feel so good right now, but it all comes falling down”

The words remain the same as they were when released the third of August, but now being contextualized with their recent circumstances, they’ve written a different story, an eerily retrospective prophesy of his own death.

One of the first clues being the opening track “Come Back To Earth” which implies that he would soon be leaving it. Another is the haunting line in “Self Care”: Like September I fall.”

Maybe that was his intention—his genius—all along. We never really will know.

Successful musicians work hard to both entertain and empathize with their audiences. They unknowingly gain their listeners’ trust at a rapid rate. Wearing their hearts on their sleeves they build community and bask in the appreciation of their newfound loyalty.

Mac Miller is no exception.

His fan base spanned further than the Pittsburgh tristate area. Most if not all stood by him when he transitioned from Easy Mac with the Cheesy Raps to Mac Miller, when the goofy lyricism of KIDS matured into the highly introspective Watching Movies With The Sound Off.

We being the loyal fans we are naturally interpret any artist’s past work ethic as their promise for a colorful future filled with tours, singles and albums. We blindly believe that our love for them alone will power their morale, and we’ll all live happily ever after the end.

It takes instances like that of September 7 to remind us that we cannot be so ignorant to life’s uncertainty by maintaining such unrealistic expectations of reality. 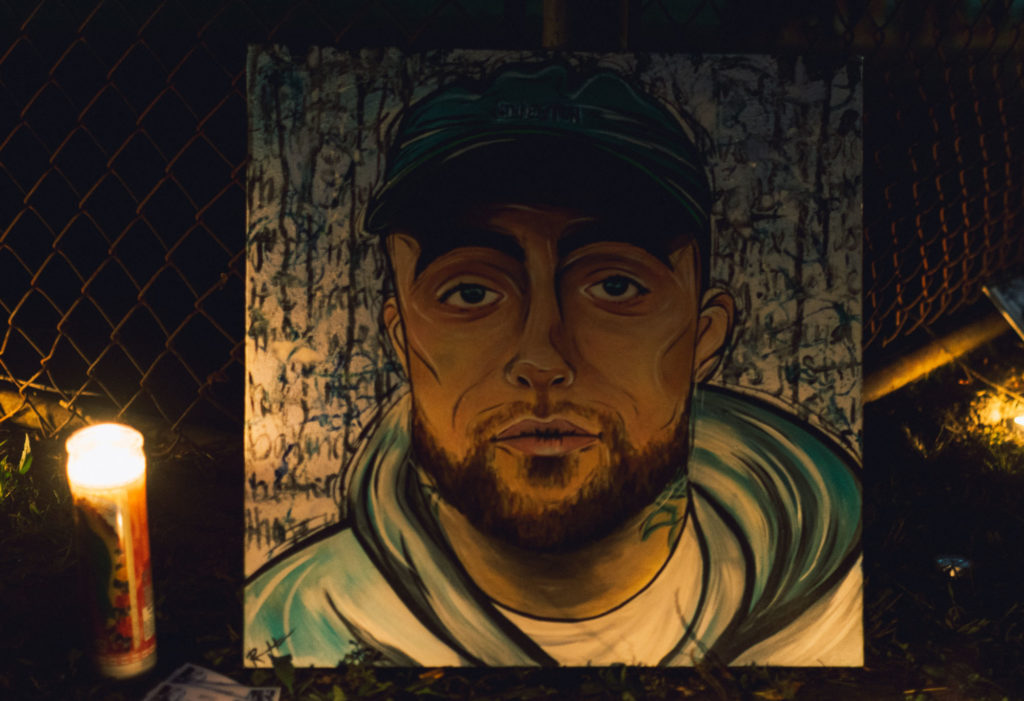 However, one thing I do know for certain is that instead of excitedly awaiting for doors to open on November 19 for the Swimming tour, I’ll be anxiously waiting for the moment of mourning and sorrow that will likely feel like a punch in the gut.

I’ll try for Mac’s sake to re-infuse the happiness I once felt from his music back through the cords of my headphones. I’ll still try to blow out my car’s speakers with “Outside” while driving on a sunny day, stupidly dance around to “The Spins” when I’m home alone and sing along to “The Weekend” in the shower.

All of this because anyone who impacted so many lives so positively deserves that optimistic of a legacy—even if he himself never felt the bliss and empathy that his music evoked from his eager listeners.

Feature photo taken by Me.